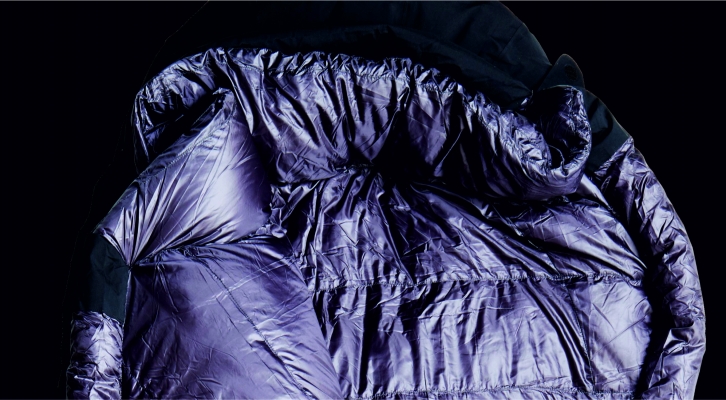 Down sleeping bags appear to be quite simple products when viewed from the outside, or even from the inside. Technically, however, they are both complex and sophisticated. This page takes a look at the construction methods and design features commonly found in modern down sleeping bags.

Baffles are the chambers between the outer shell and the inner lining that contain the down. Their aim is to hold the down in position as uniformly as possible.
The simplest type of baffle uses the stitched-through method. The shell and lining are stitched directly together to create the chambers into which the down is inserted.

The disadvantage of stitched-through baffles is their limited volume, which restricts the ability of the down to “loft” or expand to trap heat. The down is also unable to fill the area beside the seams, resulting in heat loss. As a result, this method is of limited relevance for alpine or expedition use and is really only found in very lightweight bags.

To counter the problem of heat loss through the seams and to allow the down optimum room to loft, most sleeping bags are constructed of baffles made up of self-contained “boxes” of down. These box-wall baffles lie between the outer shell and inner lining. There are four main types of box-wall baffle, illustrated below in order of increasing thermal efficiency.

In the standard box-wall design, the down is unable to fill the corners, enabling heat to escape along the walls.

The overlapping effect introduced by the – almost identical – slant and trapezoidal box-wall designs allows the down to fill the corners and means that heat loss is reduced.

A logical extension to the overlapping box-wall baffle is the V-tube baffle, which is generally recognised to be best construction method of all. The only minor disadvantage of the V-tube design is the slight extra weight incurred by the greater number of baffles, requiring more fabric.

The types of baffle construction discussed so far are those used by the vast majority of manufacturers and are employed in single-layer systems. Certain sleeping bags also use double baffle systems, but these add considerable weight and are only found in sleeping bags intended for exceptionally cold conditions, where the large amount of down requires extra baffles to control down distribution.

Sleeping bags basically have a back half and a front half. These are normally separated by the zip on one side and by a side baffle on the other. This side baffle is designed to stop down from the front migrating to the back (or vice versa), but is deliberately omitted from some sleeping bags so that this option remains open.
The side baffle is another area of potential heat loss, as down does not always fill this area well. To overcome this problem, warmer and more sophisticated sleeping bags use a V-tube side baffle that runs the full length of the bag. The diagram below shows a cross-section of the three different designs.

The circumference of the outer shell of a sleeping bag must be greater than that of the inner lining. This differential cut creates the volume between the shell and the lining that is needed to allow the down to loft.

The fact that virtually all sleeping bags have zips illustrates the commercial fact that zips make sleeping bags easier to use and more versatile when it comes to regulating temperature. On the minus side, however, zips add weight and lose heat, requiring a zip baffle that brings a weight penalty of its own.

Zip length is therefore another factor in the design equation. Many sleeping bags opt for something in-between a full-length zip, which allows the bag to be opened right out, and a half-length zip, which remains the preserve of specialist designs – lightweight and uncompromising.

The zip area needs to be insulated by its own zip baffle. In lighter-weight bags, single baffles are the norm, but for bags intended for colder climates, two (overlapping) baffles are de rigour.

For the sleeper, the head represents the area of greatest heat loss. Most sleeping bags allow the hood to be closed around the head with a simple adjustable draw-cord. Sleeping bags intended for use in extremely low temperatures usually have more sophisticated, ergonomic hood designs that efficiently envelop the head.
To prevent body warmth from escaping from the mouth of the bag past the neck and shoulders, most sleeping bags also have a neck/shoulder baffle that can be drawn in around the body as required, again with an adjustable draw-cord. Some bags allow this baffle to be moved out of the way in warmer conditions.

The idea of a foot box is that it should offer sufficient room for the feet in a variety of sleeping positions, but without leaving too much empty space to sap the sleeper’s heat. Foot boxes are offered by many manufacturers in a variety of shapes and designs and under a plethora of marketing names, but most achieve more or less the same result.